Edit: I’m hosting a Tech Talk on October 19th (11am PST/2pm EST) on the Security & Privacy Changes in iOS 10. The talk will discuss many of the topics below, but on a much deeper basis. Details below if you want to join:

I just finished watching most of the WWDC 2016 videos and reviewing the iOS 10 API diffs, and put together some notes about the security and privacy changes brought by iOS 10 that I thought were interesting.

App Transport Security was introduced last year and by default blocks “unprotected” connections initiated by Apps, ie. connections that do not use HTTPS with the strongest TLS version and cipher suites. Because switching servers to the strongest TLS configuration takes time, Apple also allowed App developers to selectively disable ATS requirements by adding exemptions in the App’s Info.plist.

This year at WWDC, Apple announced that Apps and their servers will be required to be ATS-compliant by January 2017 or App releases will be blocked when pushed to the App Store.

The “Getting Ready for ATS Enforcement in 2017” blog post provides more details about the announcement and what App developers should do to be compliant.

When built for iOS 10, an App will crash if it tries to request access for a data class that does not have a purpose string defined. Purpose string keys where introduced in iOS 6; there is one key defined for each type of privacy-sensitive data (contacts, camera, photo library, etc.). App developers can add these keys to the App’s Info.plist to provide a sentence that explains why the App needs access to the data; the explanation then gets displayed in the user-facing permission prompt: 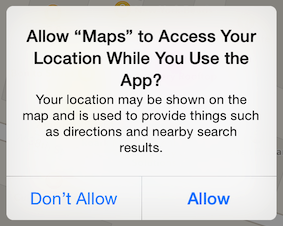 Not providing a purpose string will now crash the App when the permission prompt was going to be displayed. Apple made this change for two reasons:

Additionally, there are several new consent alerts in iOS 10, with a corresponding purpose string:

Apple has made a significant effort to extend and standardize the SecKey APIs across all Apple platforms (iOS 10, macOS 10.12, tvOS 10 and watchOS 3). This will make it a lot simpler to write code to handle certificates or keys that can be shared across different Apps and platforms.

The SecKey APIs available within the Security framework are used for managing certificates, symmetric/asymmetric keys, and signatures. However, before iOS 10 and macOS 10.12, the functions available for interacting with this type of data behaved differently on iOS compared to macOS, and a lot of the functions were only available on macOS. For example, the SecCertificateCopyValues() function needed for extracting the public key from a certificate was not available on iOS, making it difficult to properly implement SSL pinning on iOS.

On iOS 10, when the “Limit Ad Tracking” setting is enabled by the user, the Advertiser ID (IDFA) returned to the App will be all 0s.

The App Store review process has always had strict guidelines about when it is acceptable for an App to collect the IDFA, and requires during the App submission flow a confirmation that the user’s “Limit Ad Tracking” setting is properly properly taken into account by the App:

Because the IDFA uniquely tracks a device and is the same value returned to all Apps on a given device, it is sensitive data which for example can be used by analytics SDKs to track a single user across different, unrelated Apps.

Prior to iOS 10, enforcement was only done during the App Store review process and there was no enforcement at the device-level of the “Limit Ad Tracking” setting; in theory, Apps could still query and use the IDFA regardless of the user’s choice. With iOS 10, the IDFA will be empty if “Limit Ad Tracking” is enabled, which will put an end to any kind of abuse where users would be tracked regardless of of the tracking preference.

Additionally, Apple will be providing more control and information about ads to the user:

Along with the general pasteboard (where data gets put when the user manually copies data), named pasteboards have always been available on iOS and work like an App-generated piece of shared memory. Over the years, Apple has been making named pasteboards less and less useful as a hacky inter-App communication mechanism, especially with iOS 7, when named pasteboards could no longer be shared across Apps from different vendors.

iOS 10 deprecates persistent named pasteboards (ie. pasteboards which continue to exist past app terminations and across system reboots) and Apple is advising developers to use Shared Containers instead. Shared Containers were introduced more recently with iOS 8, but fulfill a similar purpose.