I just watched the WWDC 2015 sessions about security and privacy and put together some notes about the changes brought by iOS 9 that I thought were interesting.

This is a big one: by default on iOS 9, Apps will no longer be allowed to initiate plaintext HTTP connections, and will be required to use HTTPS with the strongest TLS configuration (TLS 1.2 and PFS cipher suites): 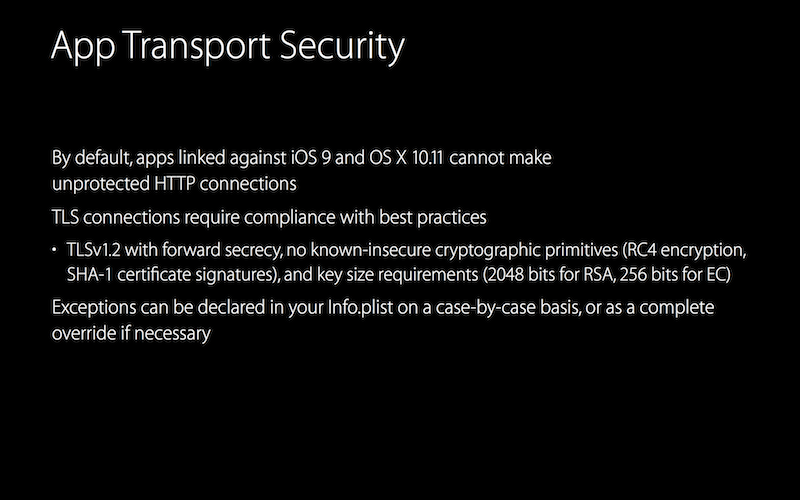 It is possible to lift these restrictions and still retrieve data over plaintext HTTP by adding some configuration keys to the App’s Info.plist. Also, App Transport Security seems to only be available for connections initiated using NSURLSession. While NSURLConnection is being deprecated (forcing everyone to switch to NSURLSession for HTTP), I wonder if plaintext connections initiated through other network APIs (such as NSStream) will fail as well.

A great change overall, and this might even be the first step to mandatory HTTPS as part of the App Store policy.

Apple has closed three privacy gaps that allowed Apps to detect which other Apps were installed on the device.

Overall, closing these privacy gaps is a great move for users as these APIs were being abused by various Apps and analytics/ads SDKs.

Universal Links are meant to replace URI schemes for communicating with other Apps. In a nutshell, an App can specify a list of web domains they’re associated with:

This new mechanism is better than URI schemes for a few reasons:

Mac address randomization was introduced in iOS 8 in order to prevent the tracking of users through their device’s WiFi MAC address. This feature was initially criticized for being enabled only if location services were turned off on the device. 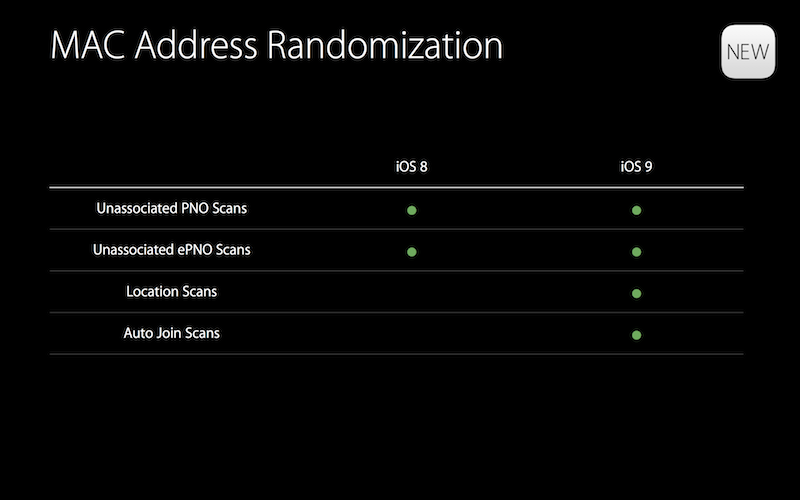 Apple made some notable changes to the Keychain on iOS 9:

Keychain items can now be encrypted using both the device’s passcode and an “Application password”; both values are then needed to decrypt and retrieve the item. This allows Apps to control when the data is accessible/decrypted, instead of having the data decrypted as soon as the device is unlocked. Potential use cases include:

Application passwords can be configured using the LACredentialType.ApplicationPassword setting.

SecGenerateKeyPair(), which is used to generate RSA and ECDSA key pairs, can now be configured to directly store the generated private key in the device’s Keychain (within the Secure Enclave). The key can then be subsequently used to sign data or verify signatures directly within the Secure Enclave by specifying additional parameters to SecKeyRawSign() and SecKeyRawVerify(). This means that the private key can be used without ever leaving the device’s Secure Enclave. The kSecAttrTokenIDSecureEnclave attribute needs to be used when generating the key pair.

Extensions were introduced in iOS 8, and are built around the concept of “extension points”: specific areas of the OS that can be customized using a designed API. Extension points from iOS 8 include for example “Custom Keyboard” and “Share”, respectively for customizing the device’s keyboard and adding new share buttons to receive content from other Apps. iOS 9 brings several new extension points geared toward network filtering and VPNs:

These extension points can only be used with a special entitlement, thereby requiring Apple to approve the extension first.